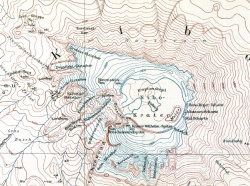 2020.10.21 - When the colonial powers finally divided up East Africa, in 1885 the Kilimanjaro volcano massif fell to the German Empire. At the time, the assault on the summit of Kilimanjaro was regarded as an important national task and tackled as a scientific research project. For various reasons, its first climber Hans Meyer had given numerous names to landscape elements in the higher uncultivated and uninhabited summit region. These names became part of the international nomenclature. In addition to descriptive toponyms, there are mainly names of individuals with added generic terms on his maps. Subsequent explorers have continued to apply the practices introduced by Meyer for naming prominent landscape elements. The designations have been included on official topographic maps as well as on current trekking maps. [1]
Baustelle : In diesem Artikel fehlen sicher noch wichtige Informationen. Du kannst dem Mount-Kilimanjaro-Wiki helfen, indem du sie recherchierst und einfügst. Danke!